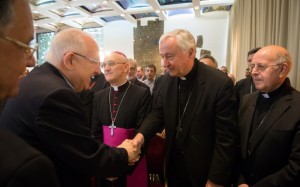 Europe’s Church leaders have urged the president of Israel to resolve a crisis threatening Christian schools that has kept them closed for several weeks.

Cardinal Vincent Nichols of Westminster and Archbishop Éamon Martin of Armagh, Ireland, said schools had been faced with “impossible cuts” and were facing a “real crisis”.

“They have been ‘on strike’ since September 1 and the children have not been having any lessons. The sustainability of their schools is critical to the well-being, identity and confidence of these Christian communities. We communicated these concerns to President [Reuven] Rivlin when we met him,” they said.

They also referred to “widespread dismay and exasperation” over the building of a security barrier through the Cremisan Valley. “Fifty-eight Christian families will be separated from their lands and their means of livelihood,” they said.